Cream cheese is a creamy, spreadable and fresh cheese with a mild, slightly acidic taste.

There are two main types of cream cheese based on the different fat content:

Whole milk, cream or a combination of both is used, depending on the desired fat content of the cream cheese. No antibiotics or bacterphages are allowed in the cream or milk, because these can hinder the fermentation process.
For the fermentation process, a combination of Lactococcus lactis subsp. lactis en Lactococcus lactis subsp. Cremoris is used.
To prolong the freshness of the cream cheese, stabilizers are often added such as guar gum, xanthan gum or carrageenan.

Depending on the cream cheese which is produced, the milk is standardized on fat content:

The standardized milk is then homogenized with a pressure of 120 to 140 bar at a temperature of 50 to 55°C. Because of the homogenisation, there is little loss of fat during the centrifugation and contribute the with casein and whey protein coated balls of fat in the coagulating.

After the milk is cooled, it is inoculated with approximately 0.8 to 1.2% lactic starter, after which fermentation takes place during 12 to 16 hours. In this period of time, lactic acid bacteria convert lactose to lactic acid, lowering the pH. When a pH of approximately 4.6 is reached, the fermentation process is being ended. At this pH-level, the milk coagulates because the casein in the milk precipitates.

To prevent a further decrease of the pH, the coagulated milk is heated and deaerated. The heating takes place by means of a heat exchanger. During this process, the milk is gently stirred while it is heated up to 20 minutes at a temperature of approximately 80°C to kill the lactic acid bacteria.

Seperation of the whey

The whole is then lead to a centrifuge, where the whey is separated from the milk at a temperature between 70 and 85°C. The concentration of the cheese in single-cream cheese is higher than the concentration of the whey. For double-cream cheese applies the opposite. Besides using a centrifuge, two-stage ultrafiltration can also be used at a temperature of approximately 50°C.

After the separation of the whey, the hot curd is kept at a temperature between 70 and 85°C. Approximately 0.5% of stabilizers and 0.5 to 2% of salt is then added. Finally the whole is homogenized in a two-stage homogenizer with a pressure between 150 and 250 bar.

On average, 700,000 to 800,000 litres of milk are collected each day from Tyrolean farms and processed at the Wörgl site. The logistics are sophisticated: Tirol Milch has more than 20 vehicles in use collecting the milk, at times along extremely narrow alpine paths. They collect up to six different milk varieties from 3,000 farms. The varieties are kept strictly separate to avoid any mixing.

Closeness to nature, protection of the environment and careful handling of natural resources are fundamental operating principles at Tirol Milch. For example, the plant has been a master of energy conservation for many years, every litre of milk can be traced back and every by-product is utilized. This requires disciplined procedures, particularly in the case of maintenance. VEGA sensors help ensure that these operations can now be conducted even faster.
The Tirol Milch plant in Wörgl, which belongs to the Berglandmilch Group, is renowned for its cheese far beyond the borders of Tyrol.
Yoghurt, butter and chocolate pudding are also produced at the site, but about two thirds of the collected milk volume is actually used in the cheese dairy. It went into operation in May 2014 and is today the second largest cheese production facility in Austria.

Close cooperation with the farms ensures a special connection to the homeland, which is ultimately also reflected in the technology that is used.
To provide the large amounts of energy required to make dairy products – in evaporation, milk cooling or container cleaning – alternative sources of energy, such as photovoltaics and an own wood chip heating system, are also utilized. In addition, all energy flows are combined so that consumption remains low. The deployment of elaborate process technology has paid off: the plant in Wörgl recently received an award as the most environmentally-friendly dairy business in Europe. 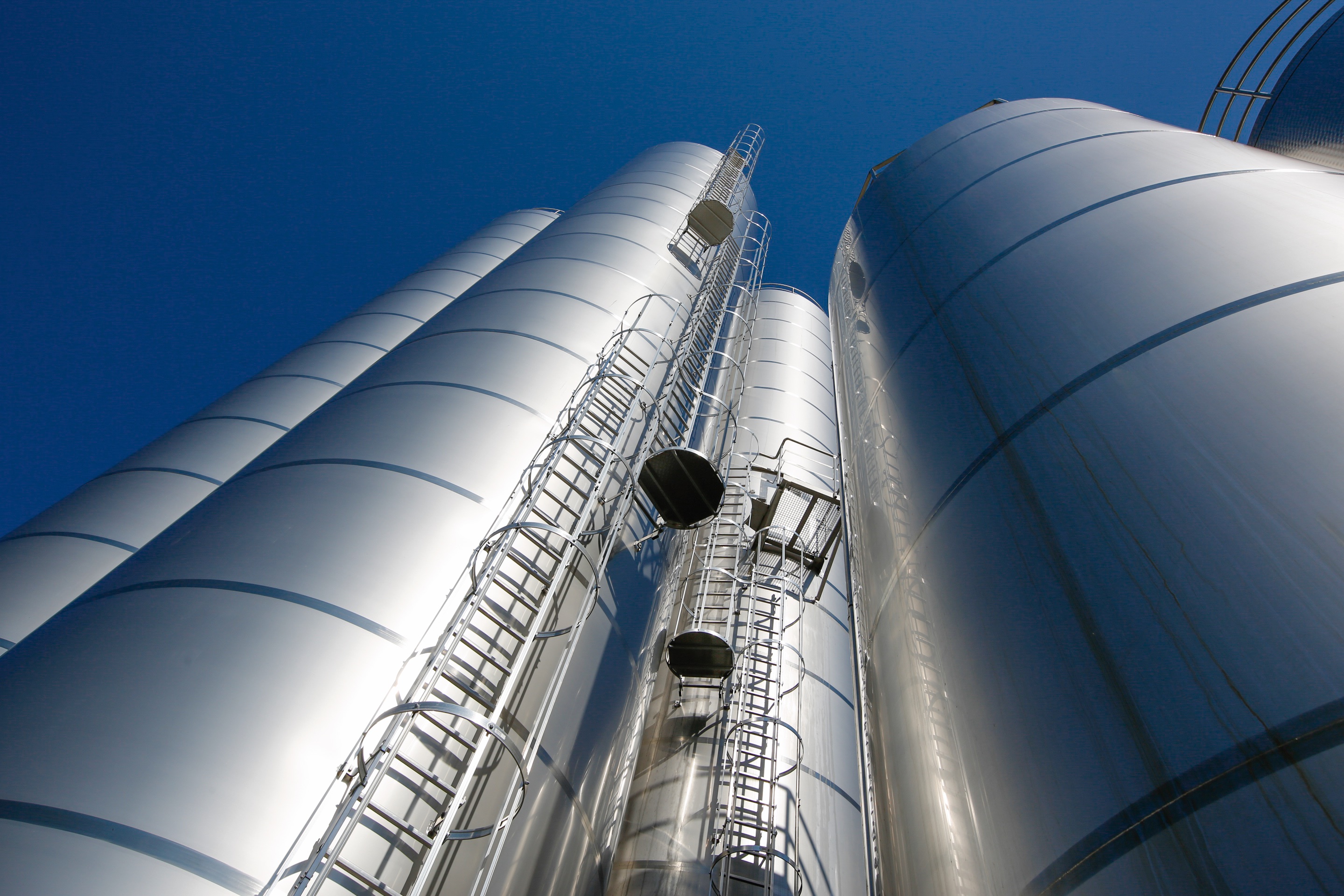 The three whey tanks were put into operation in 2014.

VEGA has been working together with the company for a long time. 10 to 12 VEGA radar level transmitters are currently in use. Martin Schneider, master electrician at Berglandmilch says he would have liked to have more, using the whey tanks as an example. 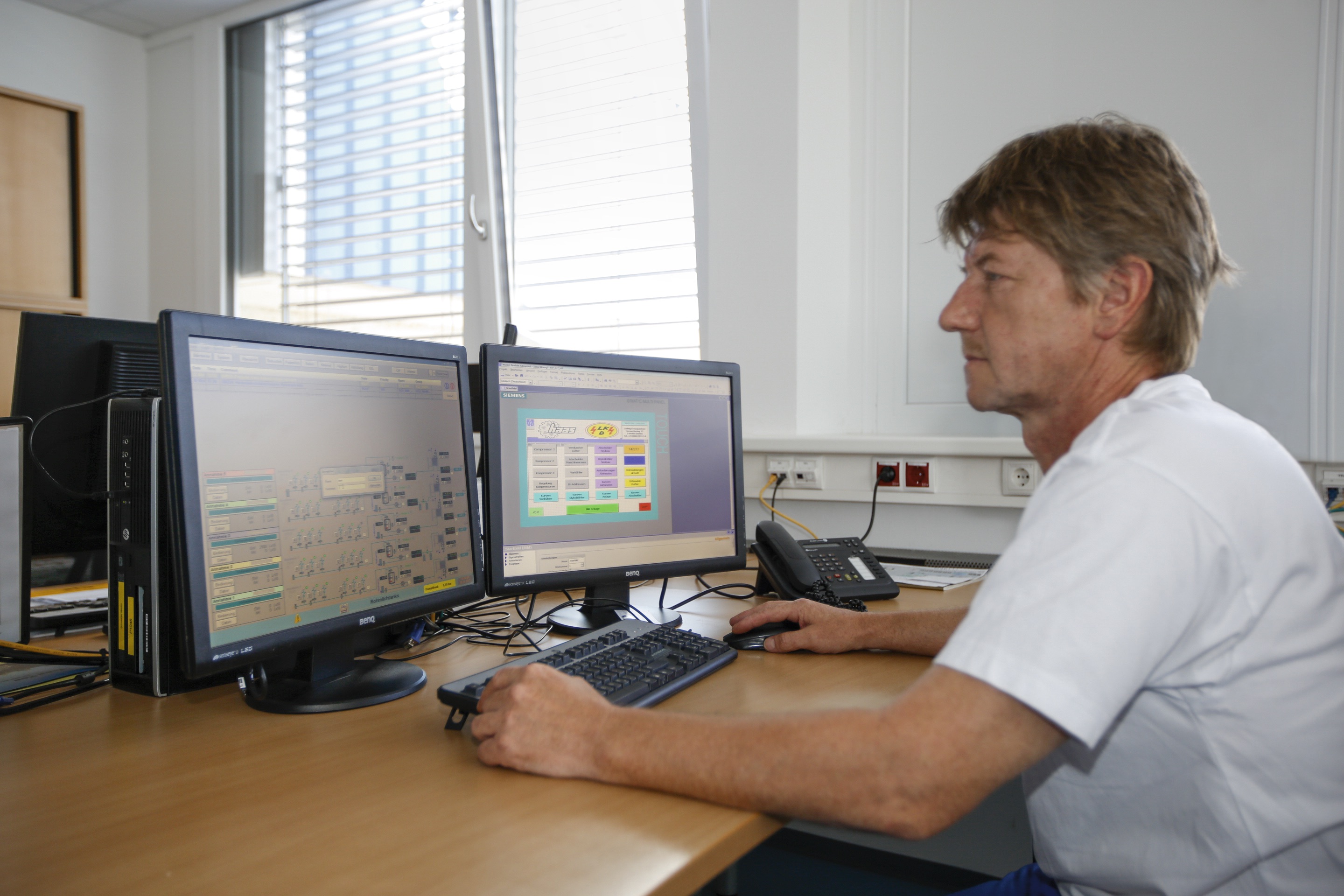 Martin Schneider, master electrician at Berglandmilch, has his eye on all material and energy streams.

In the past, many tanks were equipped with level measuring systems, but these were usually delivered within the framework of a complete contract. In practice, this did not always prove to be particularly successful as the equipment suppliers were not level measurement specialists. A differential pressure system with sensors near the tank bottom was often supplied as standard equipment. From a maintenance point of view this was very labour intensive, as Schneider reports. "During the cleaning of the whey tanks, for example, mechanical damage to the diaphragm in the pressure transducers would occur again and again when a wrench fell into the tank." Another situation: the tanks are meticulously inspected at regular intervals. To do this, the milk technician has to climb into the tanks to inspect them from the inside. Again, there was a risk that the pressure transducers attached to the base could be damaged during each inspection. 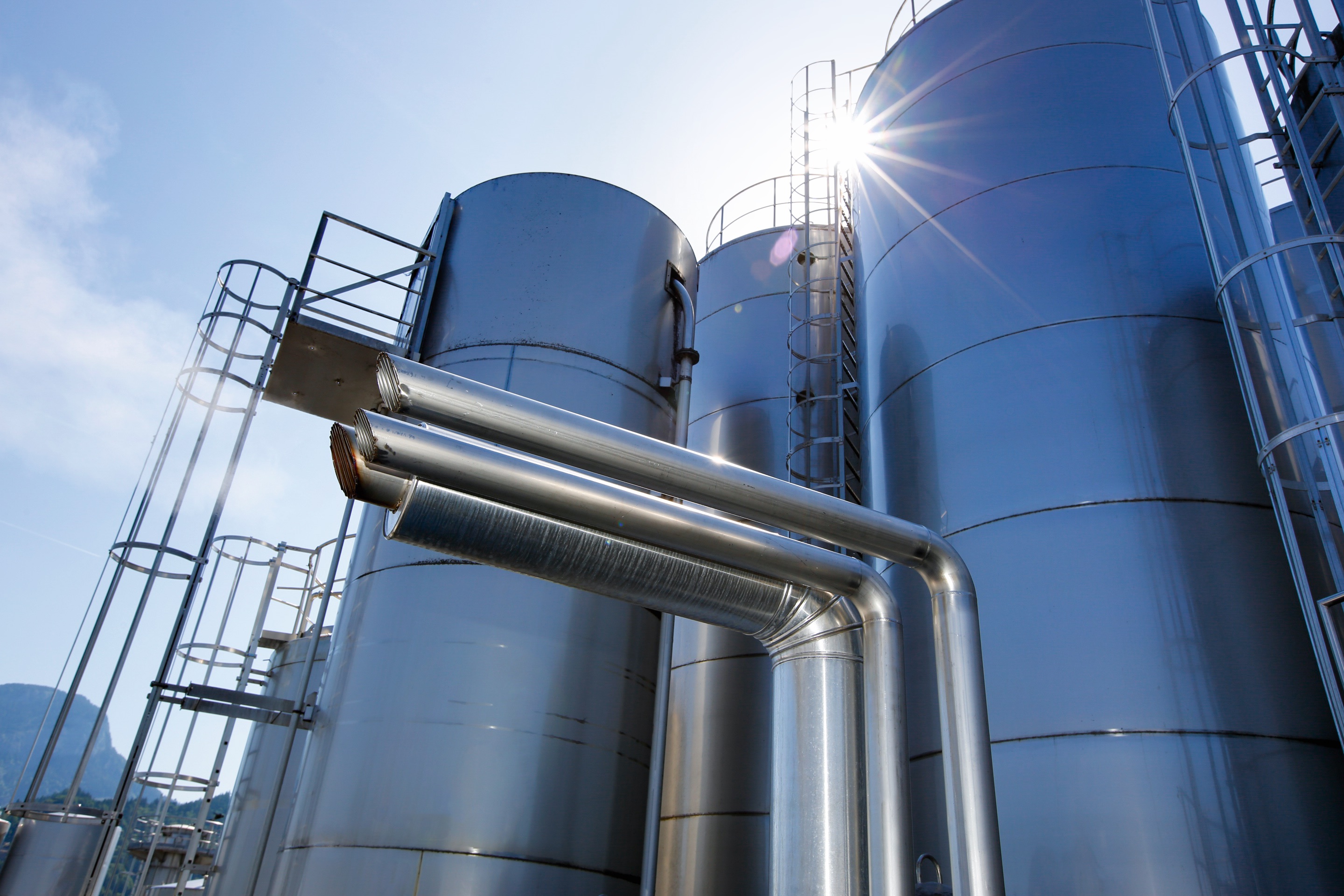 VEGAPULS 64 reliably measures the level in the whey tanks.

The three whey tanks were only put into operation in 2014. The situation became all the more unsatisfactory for Martin Schneider: apart from the mechanical problems, the existing level measuring system also created difficulties in other respects. Whey is not easy to measure using this kind of level measurement. "The protein foam caused problems repeatedly, the tank also has welds and an agitator. The spray balls interfere with the measurement too," explains Schneider. 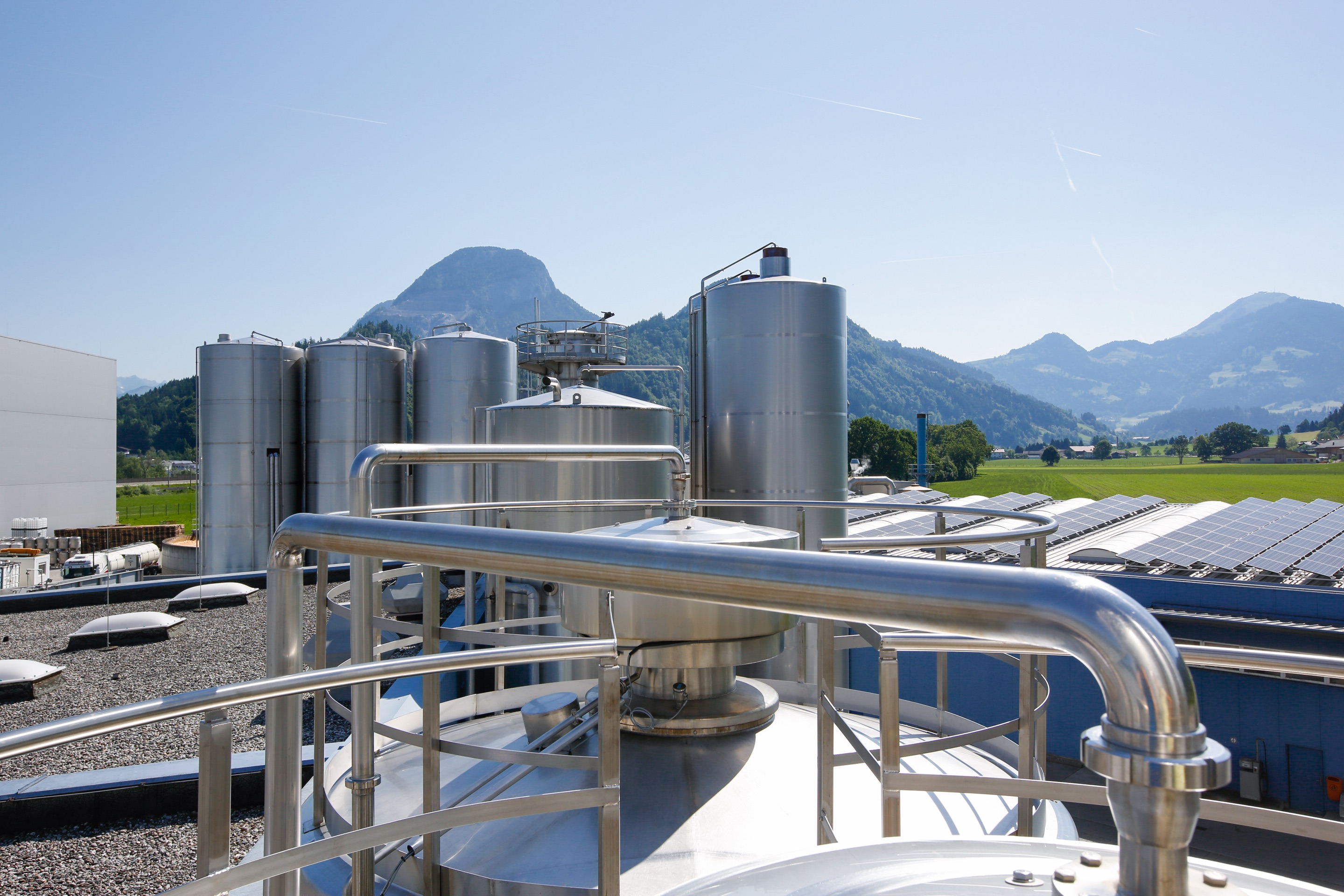 The milk is collected from more than 3,000 farms in the surrounding area.

There was a further challenge: At the end of the tanks there is a centrifuge with an output of 50,000 litres per hour. The problem is that the tanks have a flat bottom, which makes an exact zero measurement impossible with the pressure transmitter mounted a few centimetres above the bottom.
As a result, air was repeatedly sucked into the centrifuge. Alpina, a company that processes the whey at the Tirol Milchwerk in Wörgl, was particularly affected by this. The whey is delivered to it via pipeline. These circumstances caused the fat content of the whey to change, which led to problems with Alpina's filter systems.
Meanwhile, the electrical engineering team had already heard that VEGAPULS 64, a new radar level transmitter, was under development. Schneider had high hopes that its high measuring frequency of 80 GHz would result in better focusing and higher resolution of the measuring signal. As soon as the first ones became available in 2016, all whey tanks were outfitted with the VEGAPULS 64 radar sensor. 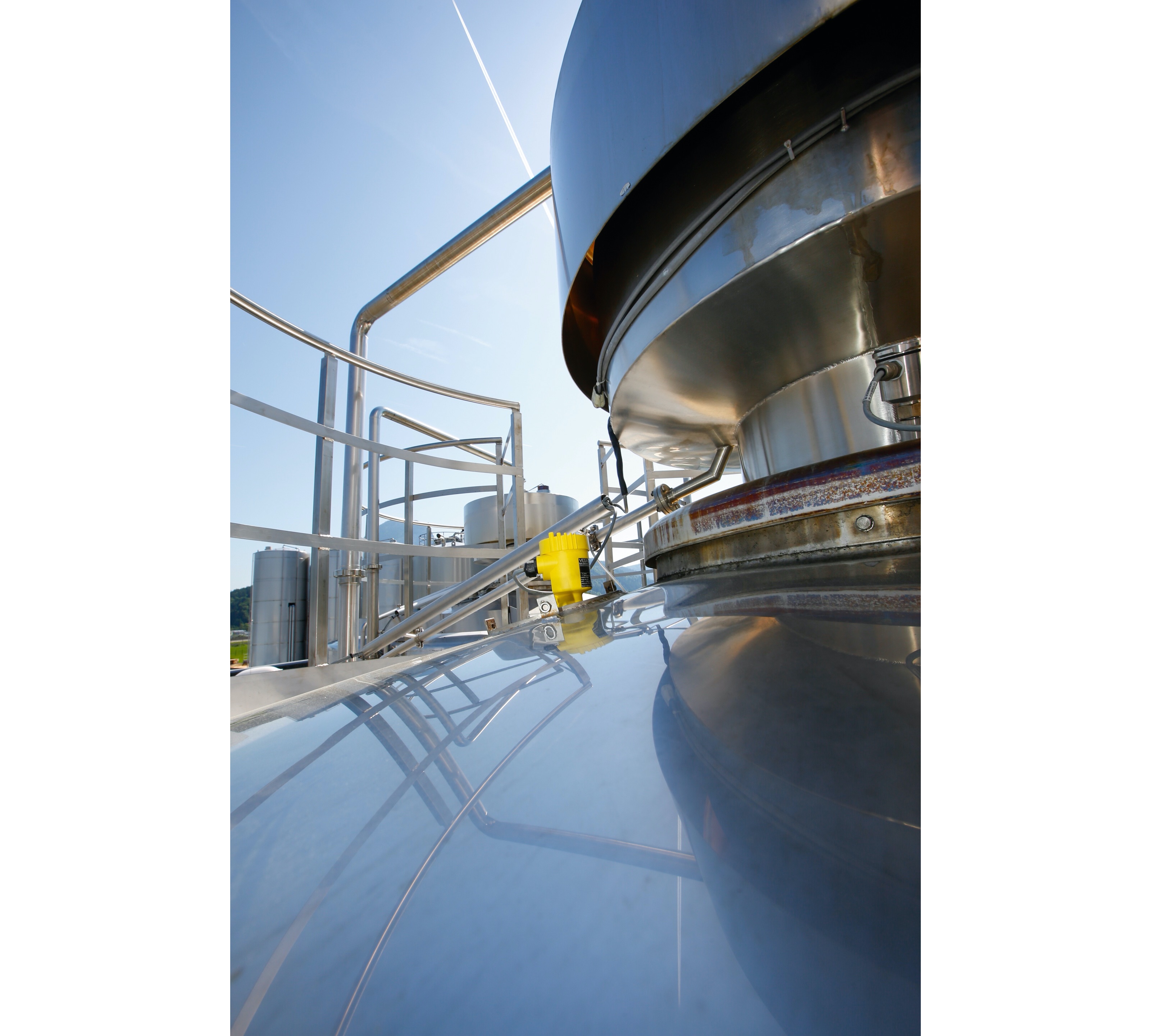 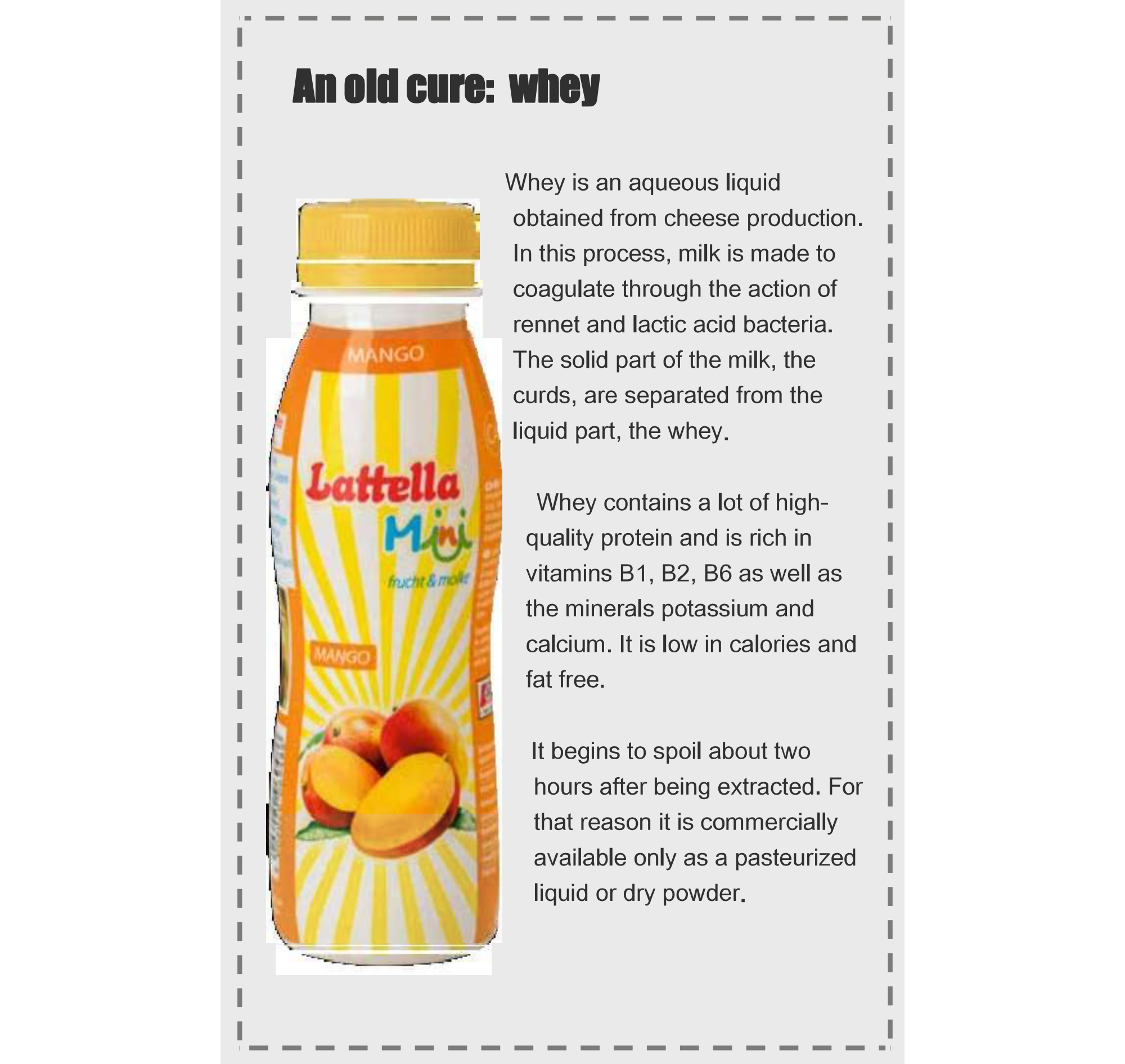 Membrane separation is used to remove certain portions from a solution. The types of …

Heat exchangers that measure up to stringent demands on operational reliability, hygiene and safety.

Salad dressing is a sauce, which is used to make an entire salad tastier. …